The History of The Pantiles

Since the discovery of the Chalybeate Spring in 1606 by Dudley North, 3rd Baron North – Tunbridge Wells has been a hugely popular location in England.

Due to the Georgian belief that the water possessed healing properties; the town became popular as a spa retreat – frequently visited by royalty.

It wasn’t until 1676 that the construction of permanent buildings took place; the 175 yard promenade – at the time known as ‘the Walks’, became the future site of The Pantiles. The initial wooden constructions were destroyed in a 1687 fire and were subsequently replaced by the distinctive colonnades seen at the site today. 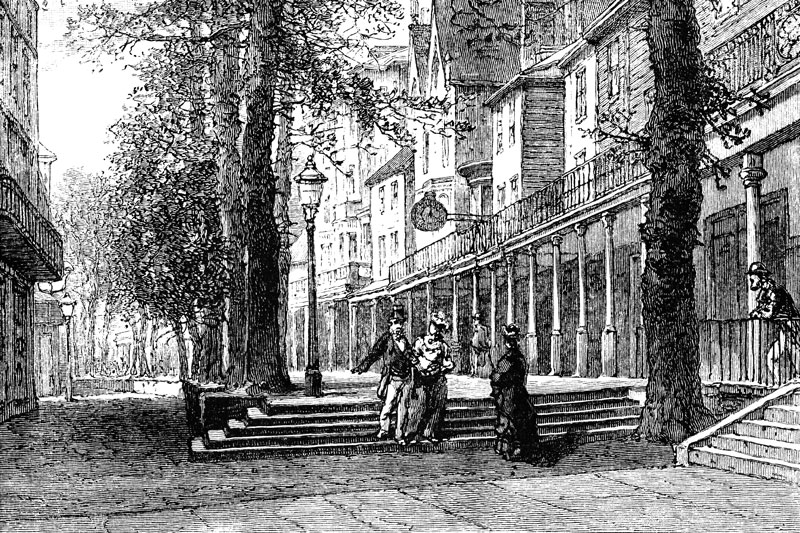 Despite this synonymity with the crown; Tunbridge Wells’ relationship with the royalty has been somewhat turbulent. Princess Anne (later to become Queen Anne), was unimpressed after her 9-year-old son, the Duke of Gloucester, tripped over the then-unpaved Walks. The fragile boy, who had the tendency to lose balance due to a brain abnormality; was particularly precious to his parents – thus the family entrusted a cottager £100 to pave and level the walkway.

Much to the dismay of the Princess – the paving of the walkway stalled for three years; it wasn’t until 1700, that the ground was finally adorned with pantiles. To appease Anne, a cluster of birch trees were planted in her honour – but by then, her favour had switched to the city of Bath.

As royal favour waned somewhat in the early 1700’s – figures such as the celebrated dandy and 18th century fashion icon, Richard ‘Beau’ Nash, helped sustain public interest in the town. His daily routine of drinking water from the mythical spring, followed by a spectacular breakfast at the Chapel further glamorised Royal Tunbridge Wells.

Despite the celebrity glamour – by the late 18th century, a new trend for seaside visits had begun, thus drawing audiences away from The Pantiles. It wasn’t until the early 19th century, that Tunbridge Wells saw a surge in popularity; becoming fashionable due to visits by the Duchess of Kent, Queen Victoria and Prince Albert. During her long stays in the town; the Queen would visit the springs daily before strolling along The Pantiles.

Expanding from the wells and the summer crowds that wanted to escape the capital’s heat in the summer – The Pantiles soon became one of the most iconic high streets in Britain. Revered for music and a carnival atmosphere that has distinguished the location over the centuries; it became host to diverse boutique shops and a mix of popular mix of cafes, restaurants and bars.

For over 10 years, The Pantiles has been one of Targetfollow’s valued assets. We are immensely proud of the fascinating historical significance of the location, its national reputation and stunning Georgian architecture. Maintaining the quality of the asset has always been paramount to us. From hosting the famous jazz nights during the summer – to redefining the brand through social media; we have carefully maintained the timeless essence of the shopping centre, whilst subtly bringing The Pantiles to the 21st century.