The making of the PE1 video

Located in Eye, Cambridgeshire – Peterborough One is the ‘One Destination’ for shopping and leisure. There’s something for everyone at the park, including an exciting variety of fashion, garden, home and leisure retailers.

In 2017, Cordis undertook an extensive rebrand of the location, one that has transformed the previous ‘garden park’ into the vibrant PE1; a commercial destination for the whole family. Over the years, we have employed various creative mediums to positively represent the park’s diverse offering.

Last month, we commissioned Cordis to create the official video for PE1. Fully equipped with high quality cameras and other state-of-the-art equipment, the team visited the site to produce engaging promotional content!

The team initially scouted the location, informed the site’s various tenants, and arranged times suitable for shooting. After a rough storyboard was drawn up, the equipment was prepared and filming began.

Using a Black Magic Pocket 4K Cinema Camera with a Panasonic Lumix G x Vario 12-35mm and a selection of other vintage Canon lenses, stabilised by a DJI Ronin-SC – Cordis captured the various tenants at the location.

From the striking oranges of Inflata Nation to the tranquility of Hebden School of Dance – the varied selection of businesses help add life and colour to the video. Meanwhile, the vibrancy of Van Hage’s beautiful gardens dynamically represent the diversity of the park. 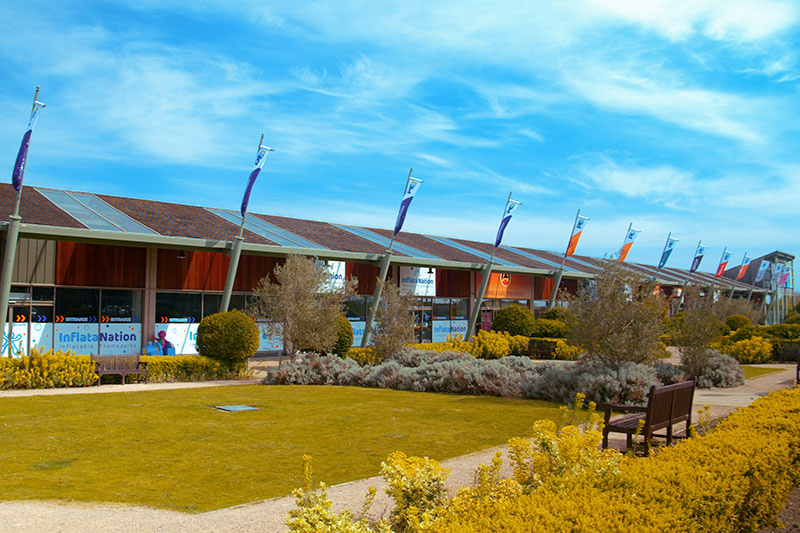 After the shoot, Cordis immediately got cracking with the editing process in Adobe Premiere Pro and After Effects. However, no clips could be set onto the timeline until a suitable soundtrack had been selected.

The kinetic pace of the clip intends to hook audiences with the location’s striking colours, highlighting the best of retail and leisure in a mere 35 seconds. The video has also been output in a 1:1 aspect ratio, making it more palatable for social media audiences – particularly for those viewing the footage on a smartphone. Through strategic utilisation on the park’s various digital platforms, the promo will build traction and stimulate footfall.

The music was discovered on Facebook Audio Library – composed by Giulio Cercato, this piece perfectly encapsulates the kinetic energy of the 35 second clip. Next, each shot was selected and correctly timed to the audio!

Targetfollow would like to Cordis and everyone at Peterborough One Retail Park for their hard work in front of and behind the camera! We are eagerly awaiting a sequel…

In the meantime, the mini movie can be viewed in all of its splendour on Vimeo. We recommend viewing in HD, full screen with the volume cranked up!